TWoM: Days of the Siege – Hidden in the ruins

Days of the Siege: Hidden in the ruins

As we reach the end of the last week before Spiel Game Fair in Essen, Germany, the biggest tabletop gaming event in Europe, we would like to give you another batch of information regarding Days of the Siege, the second expansion for This War Of Mine: The Board Game. Especially, that we are planning its premiere in Spiel and you may get your own copy by preordering it here.

You already know a lot about Days of the Siege. If you wish to catch up on all the highlights of this expansion, just read our earlier articles about its game components, an in-depth overview of the War Campaign Forlorn Hope, an installment covering new Locations, as well as the newest material about the Story Characters. This time we will tell you a little more about all kinds of tokens and markers used exclusively with the War Campaign Forlorn Hope. Of course, we do not mean to spoil you the experience, so we will just give you a taste of their effects and narrative they might trigger in the game.

Let’s start from the elements you use most frequently in the campaign. These are the Location markers and Exploration tokens. The first ones are used in pairs in conjunction with Location spaces from the base board to indicate, where any Locations available to your group are physically present on the Map. As you already know, movement on the expansion Map is much more “tangible” than in the base game, with Scavenging parties physically sneaking around Pogoren with their available Exploration cards. Time is limited and danger always right behind the corner, therefore the position of an interesting Location in regard to your Shelter is crucial for your survival. What makes a Location interesting? It might be a Special Location connected to some active card from the Time track, a place with a powerful special effect, or a card with an Exploration marker – and you may only Explore a Location (thus hoping to get some Findings) if an Exploration token is placed on it. Most Locations come with 1 such token and once it is discarded after a successful search, a given Location no longer offers food, items or resources. It means that you have to think carefully before you blindly deplete your neighborhood of supplies. 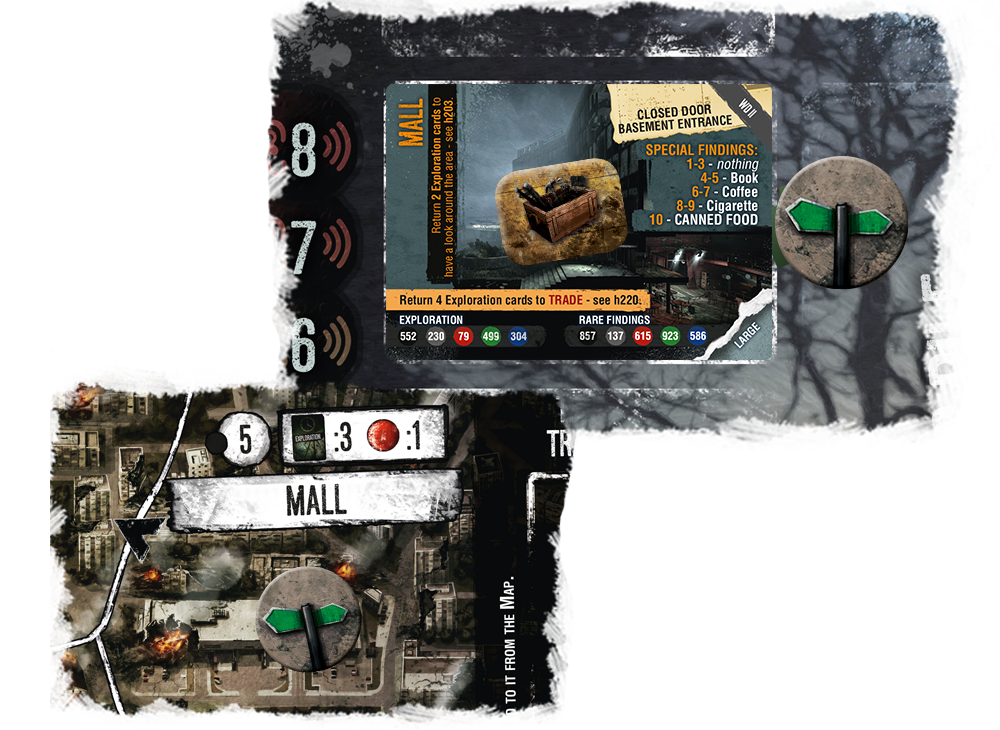 Another group of tokens is much more “story-oriented”. 3 Airdrop tokens might appear at the beginning of each Act depending on the Event cards you draw. They represent the external aid for the inhabitants of Pogoren provided by international organizations. But remember that your group is just one of the many awaiting such help, and people will resort to bloodshed if they fear that they will return empty-handed to their ruined homes. Additionally, depending on the current Act, these tokens trigger completely different encounters to reflect the changing situation in the city.

Then we have the lettered Script tokens you know from the base game. They are used to mark points of interest around the city, in which you perform certain tasks or check rumors. It’s usually enough to reach a marked District and spend enough Exploration cards to dive into the narrative as instructed by a matching card from the Time track.

Finally, there are the Story tokens you keep face-down, with only their numbers visible. You may acquire them as a result of your narrative decisions and strategy. Once some script allows you to see their front and place the token on the Act sheet, you can be sure that at some point later in the game you will be given a chance to use your Story token to trigger a unique effect. This way a choice made in Act I will affect the well-being of your group in, say, Act III. The Story tokens are scattered throughout the whole War Campaign and it is simply impossible to get all of them in one or even two campaign playthroughs.

Finally, we get to the tokens with dedicated special rules. They appear due to various effects, such as Ruins tokens placed on the Map after a bombardment of the city, or Engagement tokens introduced when soldiers of two warrying sides clash on the streets of Pogoren. Their rules can be found at the back of the Rulebook and on the Reference sheet, but you need to refer to them only when the need arises – many are used only in certain Acts or only when a particular Event card enters the Time track.

As you progress through Forlorn Hope, you will see many more tokens and learn from the Act sheets how to use them – the specific feature of the War Campaign is to teach you the basic rules and then to throw at you more and more difficulties, both of moral and strategic nature. We hope that you will be as eager to plunge into the story as we are eager to present it to you.

The premiere of Days of the Siege is really close now, with 24th October 2019 in just one week. We invite you to visit our booth in Hall 2, B136 at Spiel Game Fair and to preorder your own copy of the expansion.