We already provided you with some general information about Days of the Siege, the second expansion for This War Of Mine: The Board Game. You may also preorder your English copy here and collect it at Spiel Game Fair in Essen at our booth in Hall 2, B-136.

Now we would like to shed more light on the War Campaign Forlorn Hope. We can’t tell you everything as it would certainly affect your experience and immersion, but we will share what we can, so that you may understand better the idea behind it. Especially since Forlorn Hope is not only the largest and most complex element of this expansion, but also the main reason for designing and publishing the whole Days of the Siege expansion in the first place.

Forlorn Hope offers a mode of play somewhat similar both to the normal Campaign from the base game and to the Scenarios, yet it differs from them in many ways. First of all, it is divided into 3 Acts representing the changing situation in Pogoren – the place once again engulfed in a deadly conflict between its Grazni occupants and the rebellious Vyseni trying to take over the city. Each Act lasts 6-8 Days (i.e. Event cards), each features a set of unique rules for players to interact with the city inhabitants. Additionally, each sets a different ‘mood’ and gives players a chance to influence the narrative based on their decisions. To reflect this, there are 2 versions of Act II and Act III used depending on the outcome of players’ activities in the previous Act. At the same time, the story provides a feeling of continuity, a background you are building yourself with every decision you make. 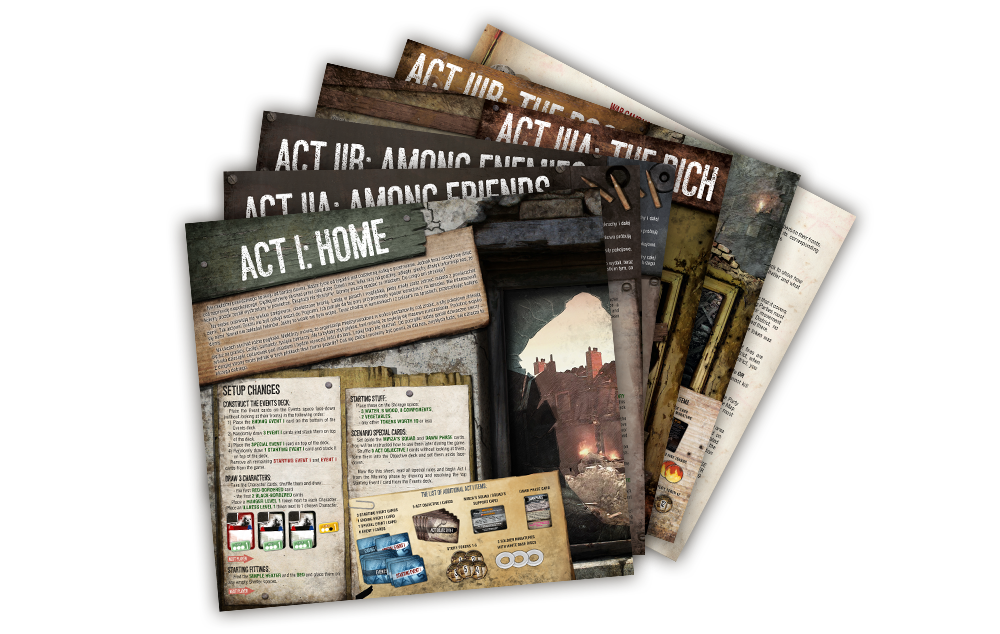 Sheer magnitude of the narrative can be measured by the full length of the War Campaign requiring you to save the game between the Acts as one Act takes around 2-3 hours to play. The unique story content is found in over 700 new scripts and on over 70 cards. The campaign may also end in various ways, giving it a ‘sandbox’ feel. Thanks to this, you may play Forlorn Hope many times and still find new ways to survive or discover things you had no idea of before. There is no perfect method to go through the whole narrative – just many paths for you to follow. Some of them are seemingly easy, others hard and requiring many sacrifices, but one thing is certain – any decision you make will have consequences. Enemies will come back to haunt you and friendships made will save you more than once. You just need to remember that war is pure chaos and the moment you finally feel you are in control might be your last. 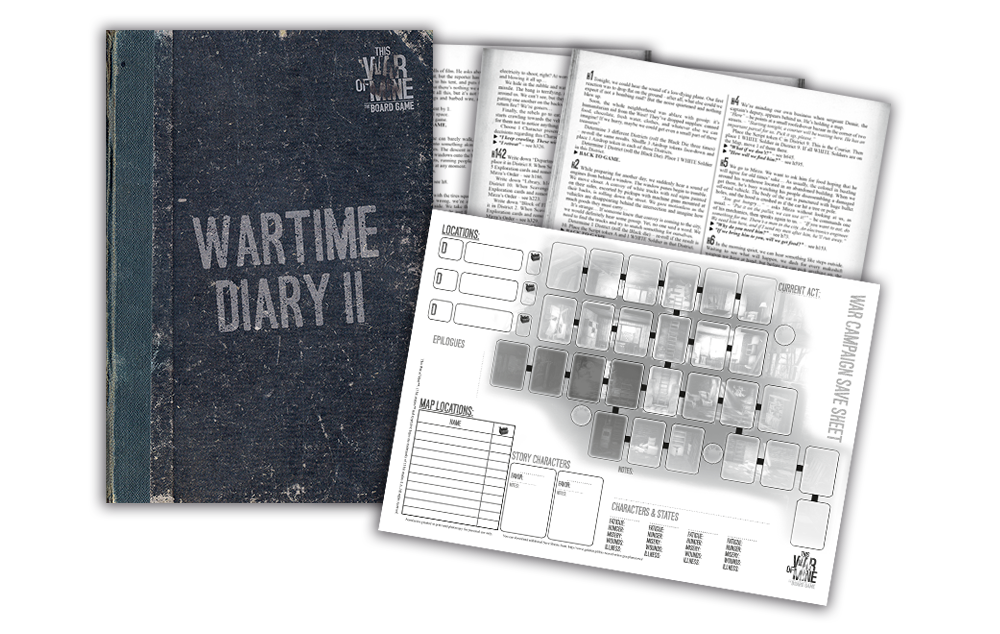 Forlorn Hope uses a set of new rules for exploring the city and interacting with various elements introduced in the story (you can find the full Rulebook here). This means that you will face not only narrative or moral choices – you will also have to manage your Characters and Shelter, as well as consider your strategy for each Day. This is because the Scavenging runs turn into real adventures, with Characters sharing their limited Exploration deck between navigating the soldiers-infested streets, performing Scavenging Actions to push the narrative forward, interacting with Story Characters, and organizing regular Explorations of Locations to find supplies. This adds a completely new level of gaming experience and enables you to see This War Of Mine: The Board Game from a new perspective. 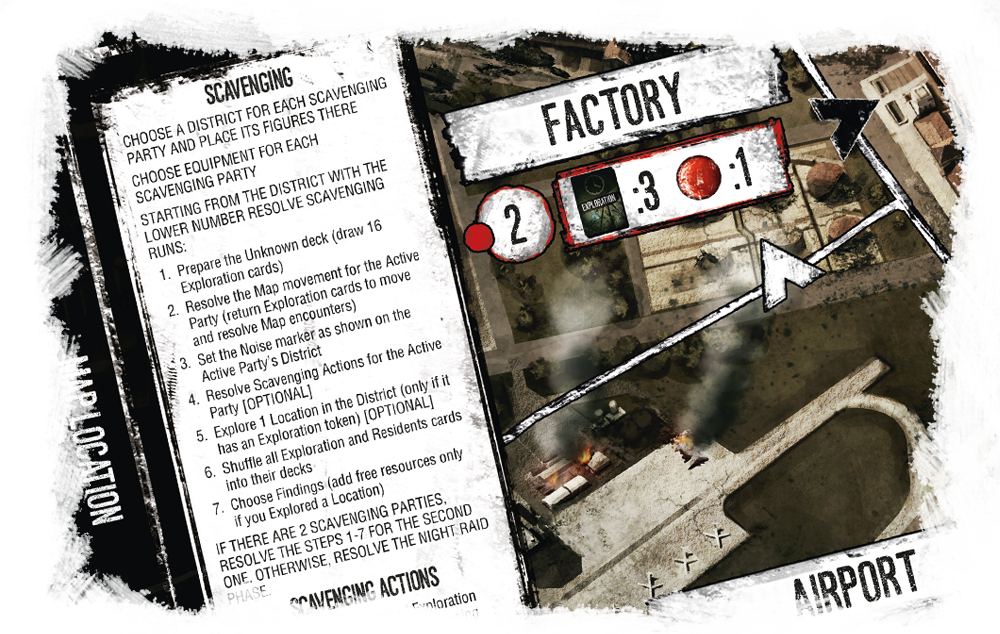 One of your worst enemies in Pogoren, besides soldiers, limited supplies, and omnipresent misery, is time. The Time track featured on the Map board is used to place Event and Objective cards, offering you a number of goals to reach. No matter how hard you try, you will never be able to succeed at everything and provide for your group at the same time. It is up to you to decide what things to do, which people to ignore, and how to best manage your dwindling resources to survive another day. Of course, failing to perform certain tasks or appease powerful enemies might mean the end of your group. Thanks to all this, with each War Campaign playthrough you will only learn a part of the story and the next time you play, you may take a completely different approach. 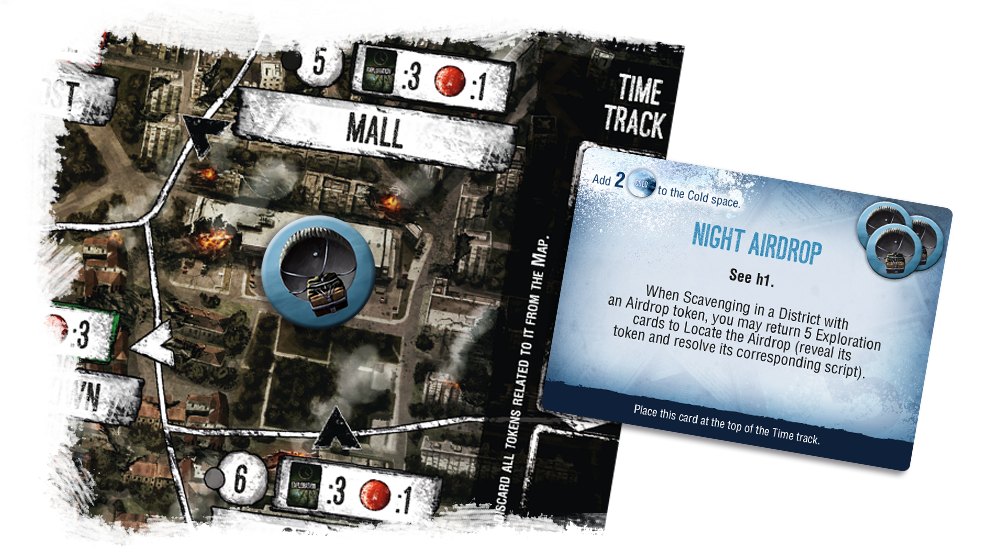 Being the main element of Days of the Siege expansion, Forlorn Hope encompasses a huge number of new components. First of all, there is the Map board depicting Pogoren divided into 10 Districts for Characters to explore. Secondly, each Act features a dedicated deck of Event and Objective cards to guide you through its narrative. Thirdly, there are new types of cards –War Fate replacing the Fate deck from the base game to deal with the movement of soldiers around the city, and Story Character cards representing people of critical importance to your group. Add to this Special Locations connected with Events and Objectives, as well as other cards introduced into the basic decks according to your progress, and you will easily see why we needed over 70 cards to cover the whole War Campaign. There are also over 50 new tokens, such as Story tokens you may gain for completing certain tasks, Location markers to indicate the places you discover around the city, Engagement tokens marking deadly clashes between Grazni and Vyseni forces, and many more. 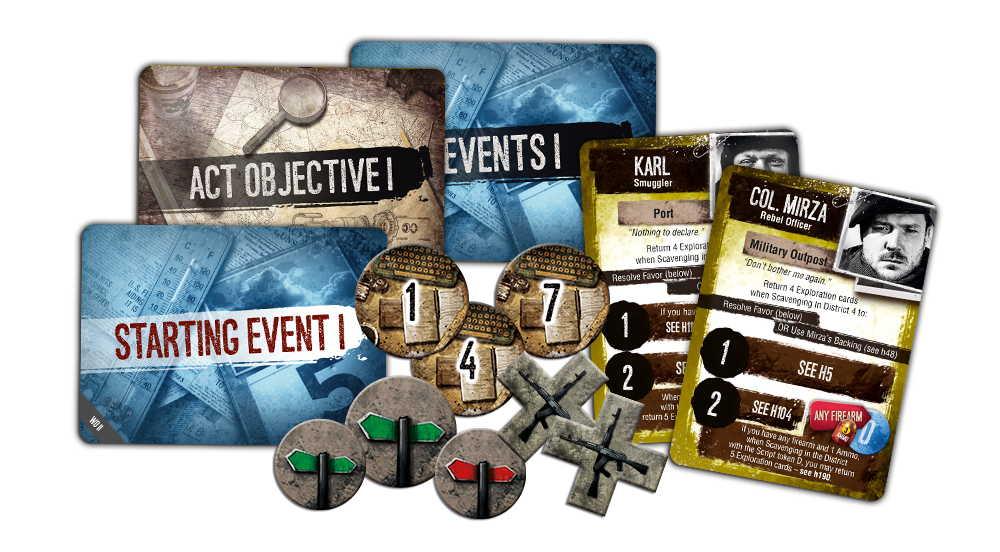 To sum up, Days of the Siege and its Forlorn Hope campaign take your This War Of Mine: The Board Game experience to a wholly new level – both story-wise and strategically. It offers tens of hours of immersive gameplay, but at the same time embraces the simplicity of the base game to guide you through the escalating conflict in Pogoren. We invite you to our booth in Hall 2, B136 at Spiel Game Fair for the presale of Days of the Siege, which is scheduled for 24th October 2019.