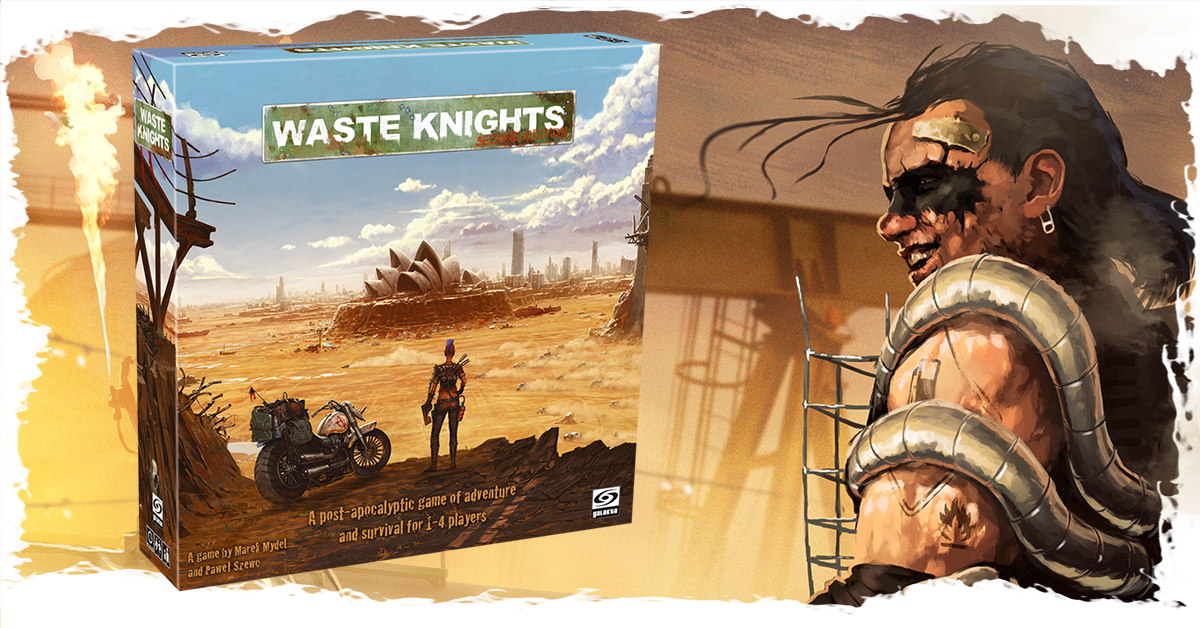 Greetings, Knights! December has started, yet we are sweating in Australian sun tirelessly developing Waste Knights: Second Edition. At the SPIEL game fair in Essen we received tons of positive feedback and we are looking forward to the beginning of our Kickstarter campaign. That is why we wish to tell you more about different aspects of the game.

In the last article we wrote about the board – cities, unique locations, terrain types and the way of moving through the ruined continent. Now, we decided to focus on what you can find at your destination: wasteland cards that represent various dangers and adventures for you to experience during your travels. You will also learn a little about resolving combat.

A TRIP TO REMEMBER

When you stop on a space after ending your movement, the person to your right draws a wasteland card from the deck matching the terrain type of your space: either the one for highways and deserts or the one for scrub and mountains. This card represents whatever you have found on the way and falls into one of the following three categories: Encounters, Events or Enemies.

Encounters – used in conjunction with the sheet of the scenario you are currently playing – direct you to the proper footnote in Book of Tales. There you can find a wasteland scene in which you actively participate. Any decisions made until it lasts will often influence not only your knight, but also the whole story. We will tell you more about Encounters, footnotes and the narrative side of the game in next articles. 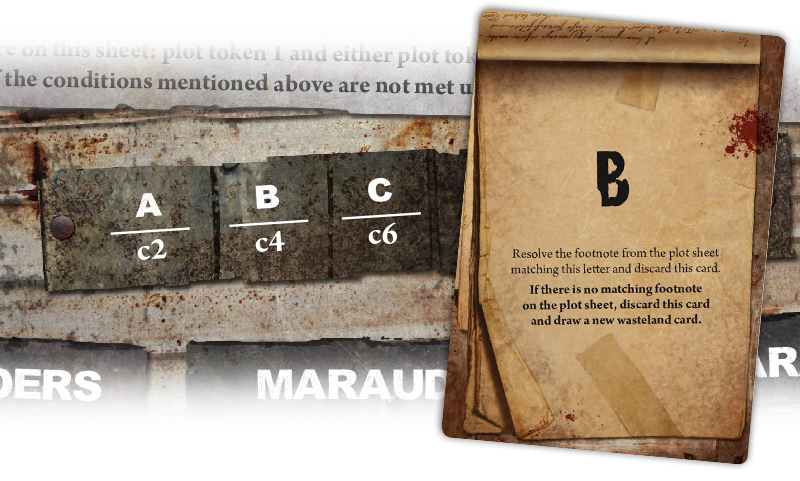 Events are usually weather anomalies or obstacles typical for the Waste: a radiation storm, a fallen bridge or a bushfire will pose a real challenge even for hardened survivors. In order to deal with such problems, you will have to test one of 6 skills your character has. Just take proper dice shown on your knight sheet and make a roll against the difficulty level from the wasteland card. If you obtain enough successes, you gain a reward. Otherwise, you have to resolve penalties connected with the event. Additionally, these cards describe special effects triggered depending on your gear and the vehicle you use. 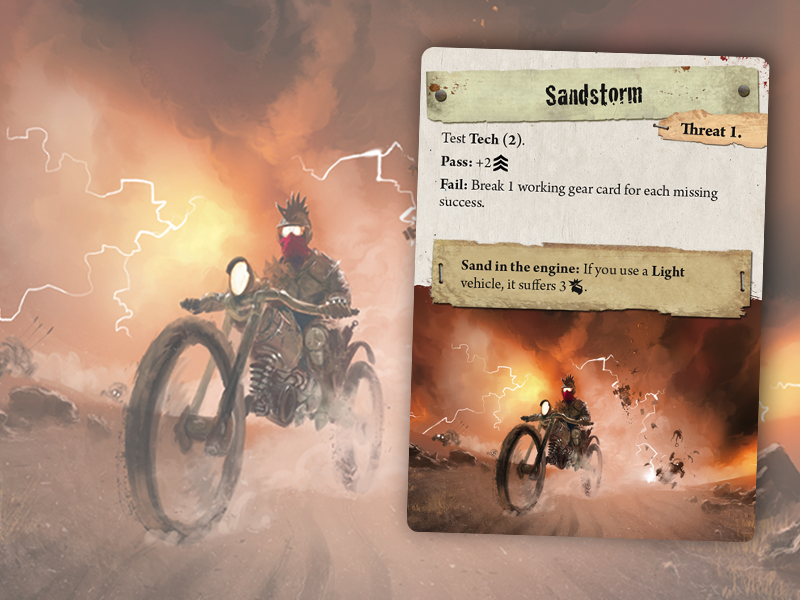 Finally, Enemies represent a multitude of misfits who roam the badlands: gangs, Cerbero robots, mutated creatures and horrifying beasts lurking in the wilds. Encountering one of those means combat that might end in a victory or a defeat. The former brings Experience Points, valuable resources or items, the latter – wounds, damage to your vehicle or even unconsciousness that results in permanent injury. 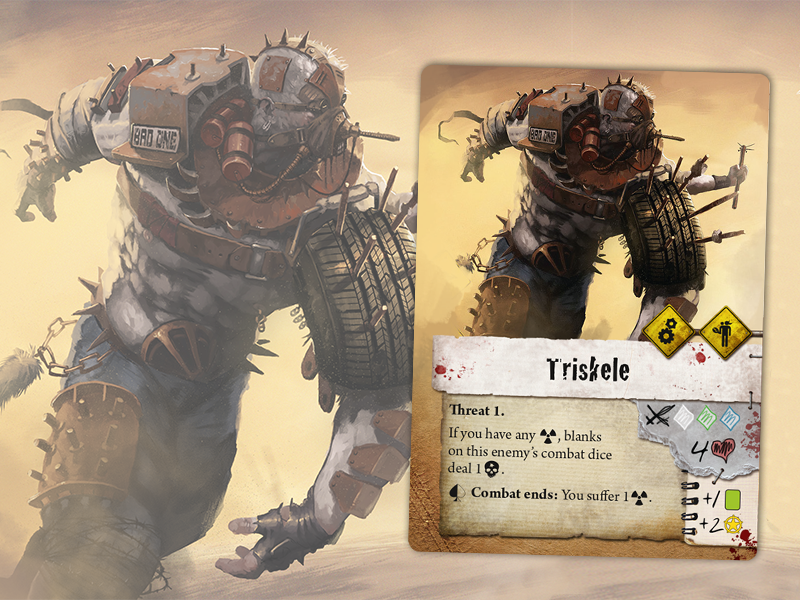 IN FACE OF THE ENEMY

Combat in Waste Knights: Second Edition is quick, but not bereft of strategy. Everything is based on one attack roll for each combatant, followed by resolving icons from dice and certain special abilities.

At the beginning, you assess your enemy and decide whether to make a ranged attack or close in for melee. In the first case, you need a ranged weapon, have to spend 1 Ammo and roll your Guns skill. In the second case – just roll your Blades skill. Of course, it is always good to equip a weapon matching a given range because you add dice from the weapon card to your skill dice, thus forming the attack pool.

As far as the enemy is concerned, you can find all necessary information on its card: Health, traits and special abilities, attack dice pool and rewards for defeating it.

In combat, you start by resolving ranged attacks. Then, if both combatants are still standing – melee attacks. Each obtained success means dealing 1 Wound. Dice may also show Criticals that activate different effects of weapons, knights or enemies. Additionally, when a knight rolls a Break, the weapon they used is broken after combat. 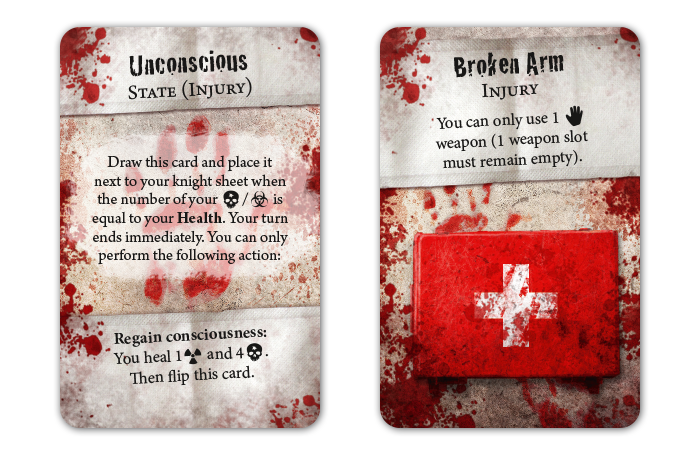 Once the number of dealt Wounds is settled, a given knight or enemy must suffer it. In case of enemies, all is simple: if the number of Wounds dealt by a knight is at least equal to the enemy’s Health, it is defeated and the knight gains its reward. As far as knights go, they may have access to gear cards (e.g. armor) or advancement cards that enable them to prevent some Wounds. It is up to them how they wish to use such options. Then you should place a proper number of Wound tokens on a given knight’s sheet. If the sum of Wounds is equal to the knight’s Health, they fall unconscious and their player draws an Injury card. Next round, the knight will be able to stand up and continue on, but they will also keep a painful memento of their enemy.

There is one more thing for you to remember when embarking upon a journey: the Threat Bag. You have to use it whenever a Threat icon appears on your route or when the wasteland card you have drawn features the Threat trait. In such a situation, you draw from the bag 1 threat token for each encountered icon and resolve its proper side depending on whether you deal with an enemy or a different type of a wasteland card. 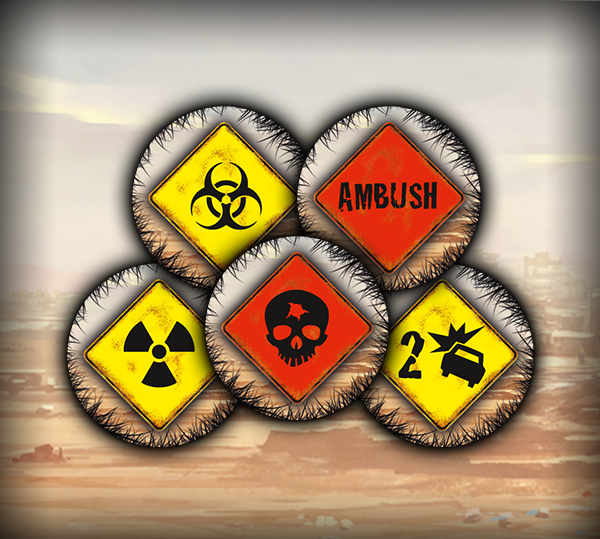 The threat token always means trouble: lost resources, radiation, additional Wounds or raising the difficulty level of your test. That is why you should try to steer away from dangerous places!

Soon, with your help, we will start an unforgettable journey through ruined Australia. Although you should expect hardships when playing Waste Knights: Second Edition, rest assured that there are also adventures and rewards that cannot be found anywhere else.

We encourage you to follow our social media pages and internet sites where we publish new materials about the game. You might also check Board Game Geek and become fans of our game. At the beginning of 2019 you will have a chance to back Waste Knights: Second Edition on Kickstarter!

Important: Terms and graphic materials used in the text are not final.