People say it’s always best to travel along the coast – no chance to get lost, streams and rivers flow into the ocean, when you get hungry you can go fishing and a cool breeze becomes a sweet lullaby. They forget to mention damn salties, killer jellyfish and the fact that ruined roads bring you closer inland anyway.

A few hundred miles south-east from Pumps you have to take a turn – the coastal road is but a shadow of its former self and the only option besides walking is to take the mountain path. However, don’t follow my example and get back toward water as soon as you can. Don’t try to look for new trails, or else you’ll end up on a ridge barely wider than your car and with no chance to return. 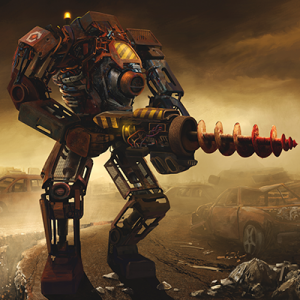 At least the view is worthwhile. Imagine a crater 3 or 4 miles wide, torn from living rock, inside which a huge industrial facility was built. Before the Scourge, Cerbero Corp. manufactured combat robots here. So, if you crave some spare parts, batteries or ammo, you won’t leave empty handed. When you scavenge its abandoned production halls where assembly machines are still trying to create new constructs or when you chance upon prototype blueprints that have never made it to the market you’ll soon learn that the robot threat is real. Especially that you can even encounter active ‘cans’ here or accidentally trigger one of many security systems this facility is riddled with.

Once you’re done sightseeing, I recommend leaving this place via one of the mountain paths. The worst thing that can happen is damaging your suspension. The only alternative is the railway tunnel carved in the mountain slope. They used to transport newly manufactured robots through there. I chose not to brave its dark depths.