It looks like I’m bound to thread paths of indigenous inhabitants of this land. Soon after I left the badlands surrounding Uluru, I chanced upon over a dozen of settlements belonging to Aborigines. I could immediately tell that their traditional upbringing and knowledge of nature enabled these people to fare better than anyone under the current circumstances.

Wisdom passed from generation to generation and perfect adaptation to environmental hardships, combined with the ability to utilize modern gear as well as any survivor, have positively affected the indigenous Australians, enabling them to thrive, where others fall.

Those whom I met seemed friendly and willing to barter, especially when petrol was involved. I had little to spare considering the stage of my journey. Still, I managed to trade some for rare plants, trophies, and drugs. All of it would be worth much when sold in any city worth its name. 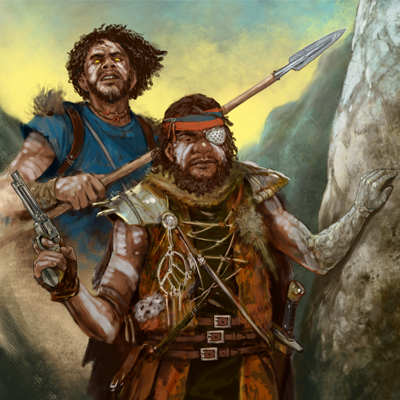 Chieftains of many settlements – tough men and women, often descended from mercenary companies established before the Scourge by Cerbero Corp to protect its facilities – told me many times that I should head north to a place they called a “sacred plateau” or “totem hill”. Intrigued, I listened to their suggestions.

I located the place they had described – it towered a few hundred meters above stark plains and crumbling lanes of old highways. I drove up a road torn from living rock. The route that could accommodate three or four cars going side to side circled the hill’s slopes, gradually getting narrower. The higher I went, the more colorful totem poles and paintings appeared nearby. Sometimes I also noticed turnouts ideal for parking a car or double backing.

Finally, I reached a blockade. Behind entrenchments built of stones and steel trestles fitted with razor wire I could see a group of almost twenty dark-skinned warriors with painted tattoos. It seemed they were guarding the place. I could hear chanting in some ancient language coming from the flat hilltop not so far up. Suddenly, a bear of a man appeared among the grim guards. Wearing a military uniform and a tactical suit, with a heavy machinegun in his hands, he looked like a hawk among a flock of sparrows.

“My name is Warragul, stranger!” he said. “This is a holy day for us. You must leave. Shamans won’t speak to you and no one thinks about bartering during this special time. Go away or camp at the foot of the hill and wait. In a few days, our celebrations will be over”.

What could I do? I introduced myself, withdrew and turned my ride around at the first suitable place, then drove downhill. Considering how little petrol I had left, and the unbearable heat, I decided not to wait. I had found the place once, after all. I should be able to learn all its secrets some other time.