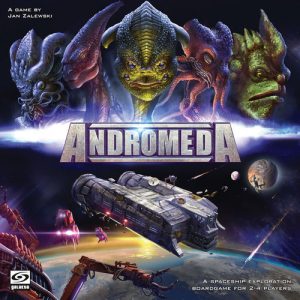 The far future. Humanity is long extinct. Its place has been taken by many new races from across and beyond this galaxy. Peace is preserved only by the Galactic Council of Elders maintaining a balance of power among ambitious races. And each of these secretly seeks to discover new technologies that would grant them dominion over the Universe.

One day, a huge, devastated spaceship appears suddenly in space, with the name “Andromeda” marked on its side. It seems that Andromeda is the abandoned wreck of a spaceship from an ancient, vanished race. Every modern race knows that these Ancients had fantastic technologies far beyond those now known, and many wish to seize the ship’s secrets for themselves. The Galactic Council has authorized an exploration team composed of scientists from different races, but while they’ll all go aboard together, they each represent a race with its own interests and goals…

Andromeda is a board game with an interesting action selection system based on the “I split, you choose” idea. One player rolls dice and splits them into two groups, but another player choses which group will be assigned to which action. 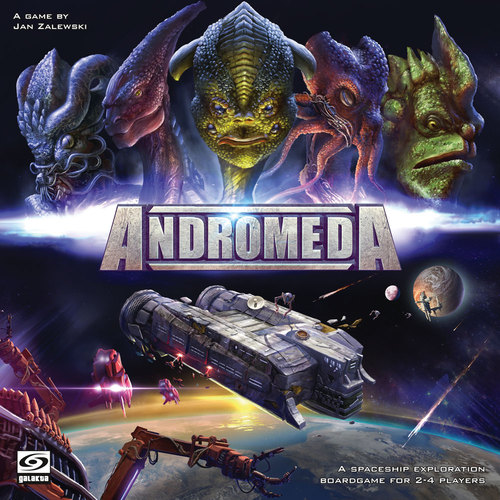 Sensors and radars scanning deep space detect a mysterious spaceship. Its call sign does not match any known frequencies, which suggests that the ship may be a wreck of an ancient civilization. Scientists suspect presence of miracles of millennia-old technology – more than proper tools to tip the delicate balance of power and guarantee domination in the whole universe! The Galactic Council of Elders decides that the wreck will be explored by a group comprised of representatives of different races. Vessels of all types full of scientists and explorers start towards the ship. Their crews have only one goal – to plunder as much data as possible and secure technologies for their races. The chase for knowledge has finally begun!

Andromeda is a strategic boardgame for 2-4 players. Each player becomes a leader of one race. Players collectively explore a spaceship belonging to an ancient civilization thus trying to secure long-forgotten technology that might help their races in dominating the universe. Additionally, each player tries to fulfill missions given by his superiors as they bring him ever closer to victory.

Andromeda is a board game with an interesting action selection system based on the “I split, you choose” idea. One player rolls dice and splits them into two groups, but another player choses which group will be assigned to which action.
A game of Andromeda lasts up to 7 Rounds, but may end earlier if any player gains a certain number of DP thus winning the game. 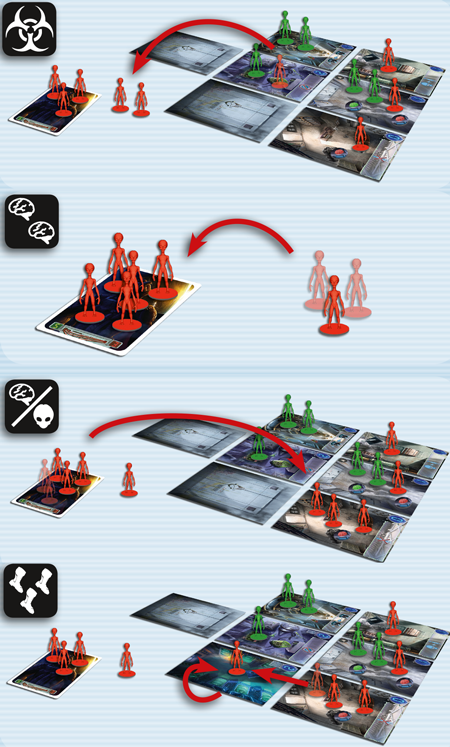 Each round is divided into Phases described below and is played according to the following order:

In the first phase of the game the first player rolls all available command dice and groups them. This way you form the Command Dice Pool common for all players, which is used by the first player to prepare an Offer. The first player proposes the first offer to the player sitting to his left. This player can accept or reject the offer.

The second phase of the round comprises of players’ turns. They are resolved using the order cards starting from the player with the 1st Player order card. The player first check his contamination, takes actions and then check his or her missions.