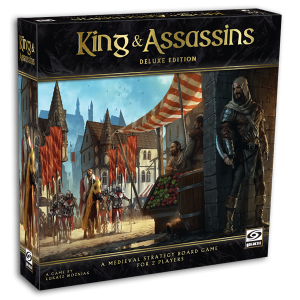 There is no greater tyranny than that which is perpetrated under the shield of the law and in the name of justice.

The king has finally descended among his people, safe behind a shield wall of his so called ‘knights’ and sure of his immense authority. Walking among the crowd, he pays no heed to the shouts of rising anger, blindly believing that his subjects are too scared to act against his rule. Yet, there are shadowy forces ready to topple the throne and secret agents hidden among the throng who are more than willing to strike at the most opportune moment. The fate of the kingdom is soon to be decided…

DESCRIPTION
During the game, players control one of the two rival groups: the merciless king with his knightly lackeys and the assassins manipulating the crowd to create an opportunity for an attack. Each side has a number of figures at its disposal, moving around the board in order to position them to further its agenda – either bring the king through a crowded square inside the castle or assassinate him before this happens. 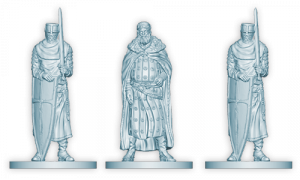 Each round one card is drawn. It features action points available to each player. Depending on the figure type – the king, a knight, a common citizen or (later in the game) an assassin – each has a unique set of actions to perform. It is up to the players how to spend their action points, optimizing all the time and thinking a few moves ahead to fulfill their goal.

However, King & Assassins: Deluxe Edition is as much about cunning strategy as it is about deft bluffing. Before the game, the assassin player chooses 3 out of 12 citizens who are actually killers in disguise. Their task is to get as close to the king as possible and reveal themselves to eliminate the monarch. Therefore, the king player must anticipate such attacks and divide his action points wisely between different knights to keep danger at bay. 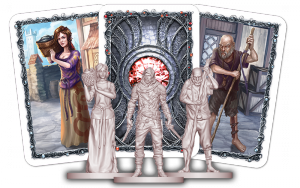 King & Assassins: Deluxe Edition is not a new game, but a refreshed and streamlined edition of a very successful title from 2013. For the fifth anniversary we have prepared the new version of the game, which features: a bigger box, larger, double-sided board with new, stunning artwork of a medieval city and most importantly – a set of 23 masterfully sculpted miniatures in 15 varieties! All this results in a truly immersive, 2-player gaming experience that will bring you hours of enjoyable gameplay. 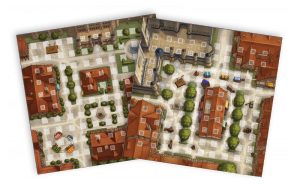 On top of that, you can also try out the game in its digital version created by Asmodee Digital and available for iOS, Android and Steam. This way you can hone your strategic skills even solo and then crush your opponent once you meet them face to face over the board.