Vistas of the Waste – Part 10: Gangraen 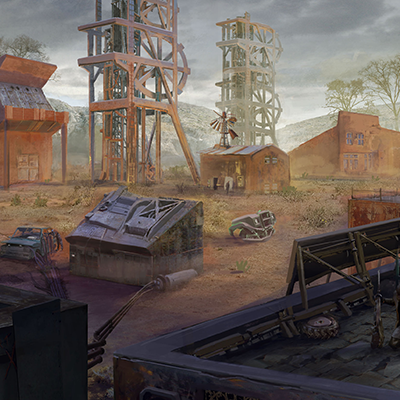 Ahh, Gangraen… An oozing cyst of human entrepreneurship grown on healthy tissue of its surrounding mountains. Gangraen, as rotten as canned meat from before the Scourge, and yet tempting enough to make you check whether a surprise isn’t waiting inside… The city out of legends – especially considering how few people are ready to cover hundreds of kilometers of badlands just to savor lousy moonshine in one of local saloons. Maybe it would be best for everyone if this distinctively revolting taste actually stayed in the domain of imagination.

Unfortunately, Gangraen is real, alive and kicking. Hidden among rugged hills, it bloats fed by hard work of miners excavating coal, iron ore, oil, gas and whatever they are told to dig out by owners of a few conglomerates that founded their headquarters here. Besides that, the city lives off settlers slowly populating western Australia and many gangs that prey upon fools ready to check by themselves whether desert is hot.

For every visitor – just like you – there are five locals, out of which four are eager to rip you off somehow and one is willing to kill you. That is when you’re lucky. Bars and cathouses are open 24/7, dirty lights are on no matter the hour, powered by free-flowing natural gas and the mayor is so open to bribes that no one wants to replace him. Rico is so used to looking the other way that you’d have to put a neck brace on him to make him look ahead.

If you get to Gangraen, count only on yourself and leave the town before dark. There’s a bigger chance you will survive a rendezvous with a pack of rabid dingo that a confrontation with regulars of local dives. Simply buy whatever you need – they have virtually everything here – and drive away before you step on someone’s toes. And believe me, this is as easy as taking a sip of contaminated water.

As for me, my journey ends here. I have a couple deals to make, and a knife long enough to keep any locals at bay. Besides, I’m protected by the authority of the Western Company, one of the bigger players of the Waste. Its bosses are ready to pay for some news I’ve brought from New Sydney. What? You’re asking me whether this is the real reason I’ve travelled here? Of course, it is! Hell, what did you think? That this was some kind of sight-seeing tour?