Quickly! After him! – Guards and Dungeons in Age of Thieves

Age of Thieves is getting closer day by day – the world premiere is scheduled for mid-October, but we are already lifting the veil of secrecy a little as far as the gameplay is concerned. Today we will show you how the city guard can hinder the thieves, what happens when a thief gets caught and what is the price of escaping from the dungeon.

The guards may not be the smartest, but they certainly are alert, stubborn and restless. All the guards have a preset Move and Vigilance attributes – how many spaces they can cover to get the thieves and at what distance they detect them. If a reckless rogue gets within the vigilance range of a guard, this guard will move towards him a number of spaces indicated by his move attribute. A guard that cannot detect any thief remains on his space – he suspects nothing and has no reason to leave his post. The same happens when a player moves beyond the vigilance range of a guard – such guard stays on his space scanning the area, always ready to catch any villain that might come near.

To the dungeon, you scoundrel!

There is a strong chance that a thief or two will get caught by the guards during the game. If a thief occupies the same space as a guard and is not hidden, he is caught and escorted to the nearest dungeon. There gaolers strip him of his belongings and beat the hell out of him. This results in losing a jewel (if the unfortunate thief has any) and 1 action card. Additionally, next turn the thief has only 2 Action Points (instead of 10) to use and must play the Move action card in order to escape from the dungeon, which limits his options even further. 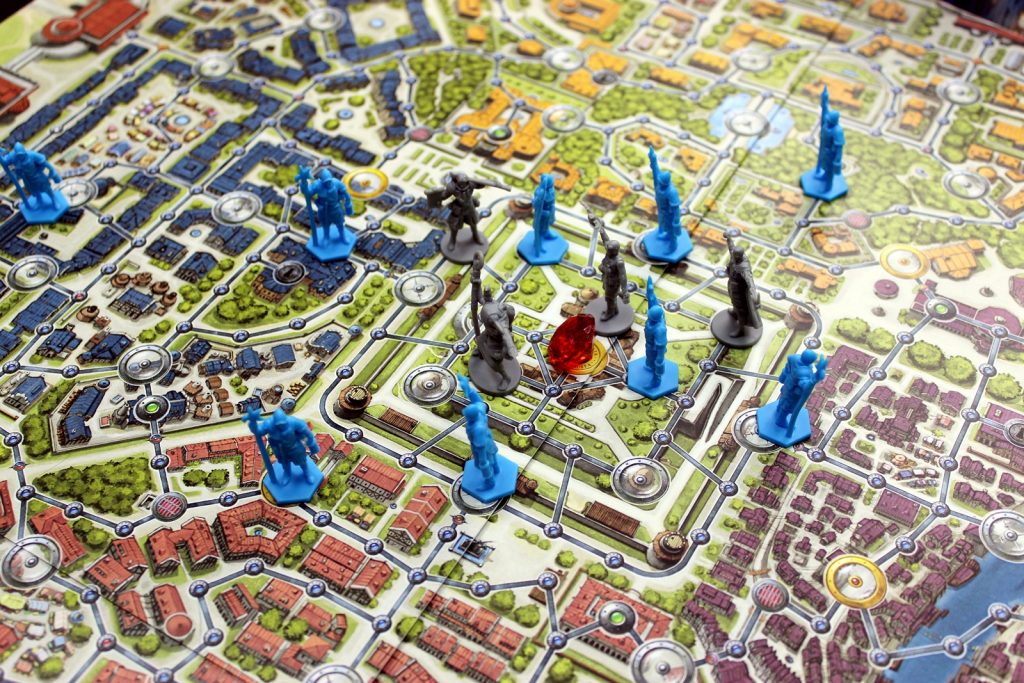 He ran that way!

The city guard is not a mere nuisance for the players – many action cards enable the thieves to use certain tricks that can fool the guards or even manipulate them into catching a rival. The guards become even more important element of the game when one of the thieves steals the Emperors’ Jewel. Once this happens, the alarm is raised in the city: veteran captains, who are very hard to avoid, appear on the board and all the guards start chasing the masters of shadow and legerdemain with even more zeal than before. Initiative – or how quickly the city guard gets to act during a turn – is determined by rolling 2 dice instead of 1 and choosing the higher result. Moreover, if a thief ties with the city guard in the initiative value, the guards and captains get to act first!

Catch me if you can…

Will you succeed in stealing the Emperors’ Jewel unseen or will you fall into the guards’ hands and end up in the dungeon? Dungeon break is rife with danger and other thieves are constantly waiting for your smallest mistake. Age of Thieves has its debut this October! Are you looking forward to it? Check the game on Board Game Geek webpage where you can find lots of information about our newest product, rate artwork and photos and join forum discussions!

1 comment on “Quickly! After him! – Guards and Dungeons in Age of Thieves”