Ares Games will be the master distributor of the English version of Galakta’s board games worldwide, excluding Europe: The first wave of releases will include “This War of Mine The Board Game”, the tabletop adaptation of the award-winning video game.

May 19th, 2017 – Italian company Ares Games and Polish company Galakta announce a new partnership to distribute Galakta games worldwide (excluding Europe). Ares Games will bring to its customers around the world several beautiful games recently released by Galakta in English – including Age of Thieves, Ragers Champions of the Arena, Zombie Terror, Andromeda, and King & Assassins, together with the upcoming This War of Mine The Board Game, tabletop adaptation of the award-winning video game, which was a Kickstarter hit last year. This War of Mine is due to release in July 2017 in Europe, and in August in the rest of the world. 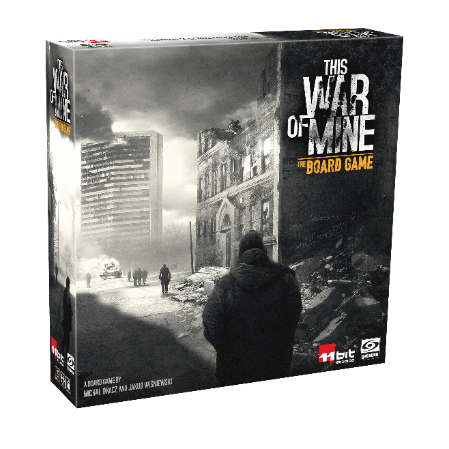 This War of Mine The Board Game is a cooperative game about surviving in a war-ravaged city, based on the gripping survival video game by 11bit studios. Players are part of a group of civilians trapped in a besieged and conflict-ridden city, enduring many hardships that often test the essence of humanity. To survive, they need to make tough moral choices, which have consequences until the rest of the game. This War of Mine was adapted to tabletop by the game designers Michał Oracz and Jakub Wiśniewski, and successfully funded with a campaign on Kickstarter that raised £621,811 in pledges, supported by 9,627 backers.

Ares and Galakta partnership started 5 years ago, when Galakta published the Polish edition of the strategy board game War of the Ring, and followed with The Battle of Five Armies and Jolly Roger.

“I think that the presence of Galakta’s great games in our catalog is a great opportunity for both our companies” said Roberto Di Meglio, Director of R&D of Ares Games. “Ares started developing a strong US and worldwide distribution for our products six years ago, and we now feel we are able to provide a good service to our customers, and to our partner Galakta, by promoting their games together with ours. Games such as This War of Mine The Board Game and Age of Thieves and the rest of Galakta’s releases are very consistent with our product and design philosophy, and we are committed to make them a success in the North American market and around the world.”

“This new part of our cooperation with Ares Games is a great extension of our relationship” said Dariusz Waszkiewicz, Galakta’s owner. “For the last 13 years, we have succeeded in building a very strong position on Polish board game market and a few years ago, we started developing our own titles. We have worked several times with the Ares Games team on some of their great titles, and at the same time, we could see how they were growing outside Europe. We are convinced that thanks to this extended relationship our games will become available to many board game fans all over the World.”

Ares Games is an Italian board game publisher established in 2011 to create quality hobby products for the international audience. Ares Games is the publisher of the award-winning “War of the Ring” board game, of “Wings of Glory” range of airplane combat games and miniatures, recreating aerial warfare in WW1 and WW2, and more recently, of the award-winning tactical ship-to-ship miniature game “Sails of Glory,” and the cooperative tactical Sci-Fi miniatures game “Galaxy Defenders.” Ares Games’ catalog also includes Family & Card Games and Euro & Thematic Games. For further information, visit the website www.aresgames.eu and the Facebook page – https://www.facebook.com/AresGames.

Galakta is a Polish board game publisher established in 2004, responsible for the preparation of localized editions of many bestselling board games, such as Catan, War of the Ring, X-Wing (TM), Descent: Journeys in the Dark, and Citadels. For several years Galakta also worked on its own board games projects which led to publishing a few recognizable titles such as Age of Thieves, Andromeda and Metallum. For further information, please visit the website www.galakta-games.com and the Facebook page – https://www.facebook.com/galaktagames/.