Age of Thieves – what’s in the box! 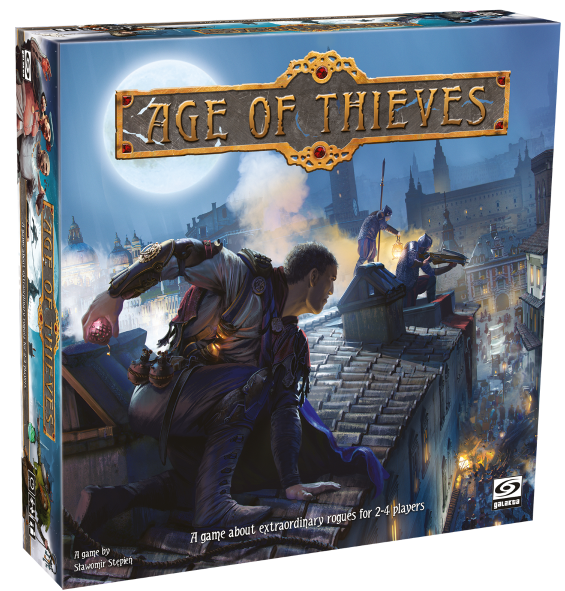 We proudly announce that Age of Thieves is complete and will be ready for Spiel 2016 as planned. Many things changed, many more were added or expanded. Today we want to show you the game in its final state – from the miniatures to the rulebook!

Hadria is a glorious city – the most impressive and one of the richest places in the Empire. Nonetheless, archthieves are just as their name suggests – masters of shadows, mad geniuses, breakers of locks and true artists of thievery. Players can choose between six different characters, each with his own motivation, weaknesses and strengths. Each thief is represented in game by a thief sheet, to which players can refer for that thief’s passive special ability. Besides the thief sheet comes also a special action card representing an active ability, which is different for each thief. This helps to diverse the thieves even further to give players a unique experience each time they play a new character.

Each player will choose one of the following characters:

Board, tokens and markers

In the box of Age of Thieves you’ll find a lot of different components, ranging from the masterfully illustrated game board to six different plastic markers and ten types of city tokens. Let’s take a look at them now.

With a clear design that divides the play area into five districts and toned down colors, Age of Thieves invites players to Hadria, Pride of the North, a hub of fervent activity for rich merchants, diligent burghers, resourceful inventors… and cunning thieves. Players will move around the board using the overlay of interconnected spaces. When the guards and jewels are placed on the board every move will count. 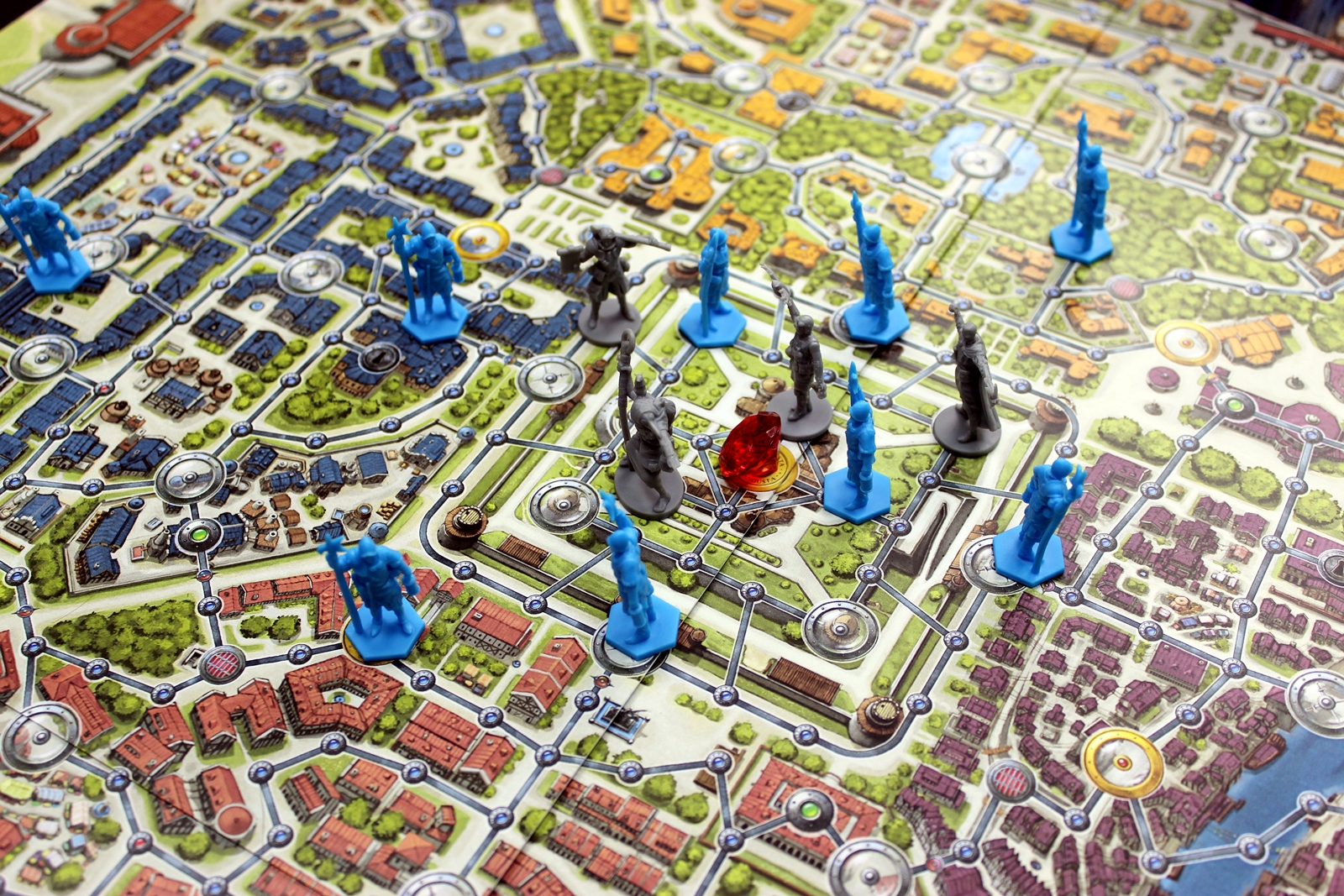 What’s on the board?

The first thing that the players will place on the board are guards. Blue, detailed figures are easily recognizable and will try to catch the thieves on every occasion. Next come the city tokens, which represent various events that you can encounter during your nocturnal adventures. There are 10 types of these tokens, each with a different impact on the game.

City tokens are not the only thing that the players will run into. There are also certain gains like three different kinds of jewels – the red Emperors’ Jewel (the ultimate goal of every thief), green jewels (worth 2 Victory Points) and yellow jewels (worth 1 Victory Point). 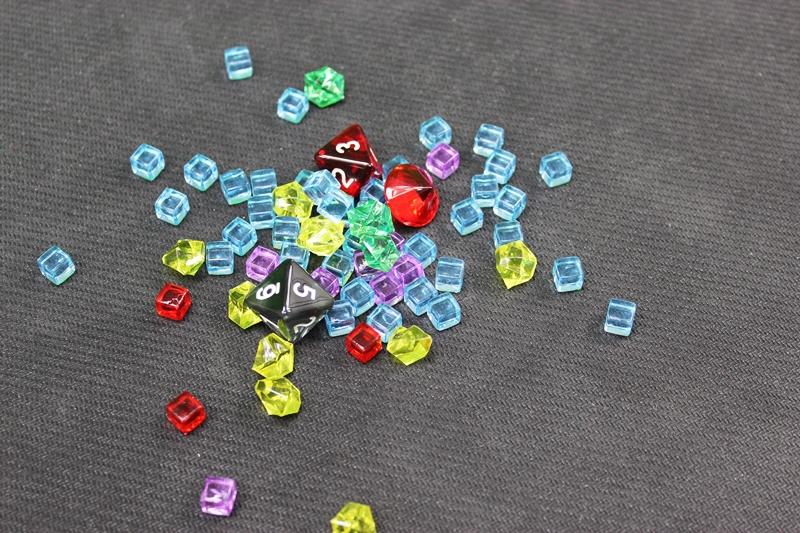 Occasionally, some actions will result in introducing certain effect markers into the game that stay on the board until the end of the current turn. These are smoke and fire markers that affect spaces they are placed on. They are a byproduct of playing certain grenade action cards by the thieves.

There are only three card types in the game. The most important are the Action Cards – the cards that players will use to set traps, lure guards, move silently etc. Next come Event Cards. Event Deck is there to make sure that each game is different. These are the global effects affecting each thief in the game. Additionally, there are also District Cards, which indicate where the players have to flee after the Emperors’ Jewel is stolen. 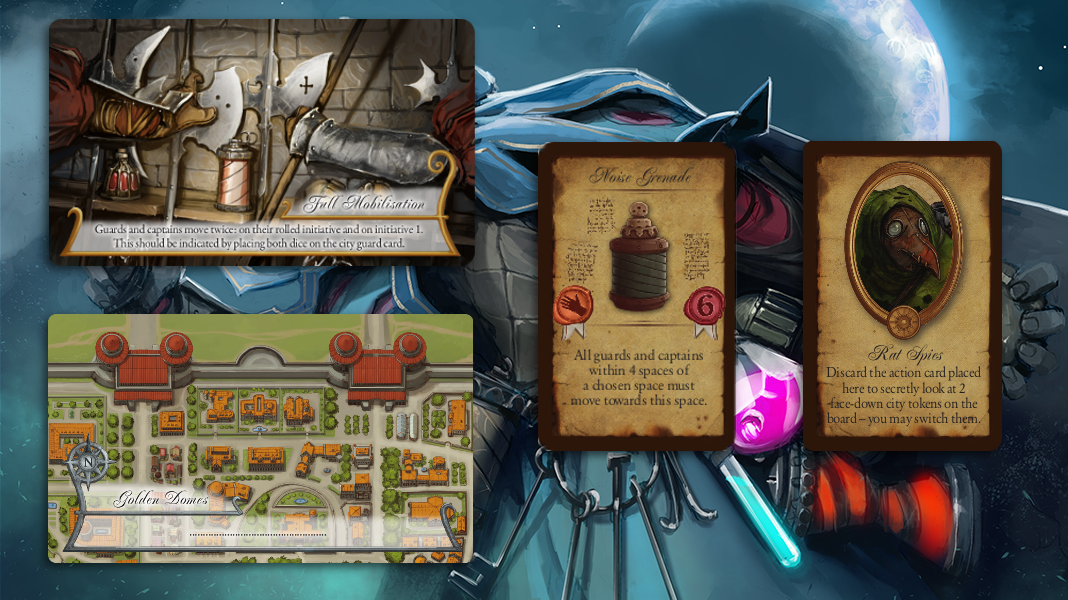 There are also a few elements not mentioned above. Each player will plan his actions behind a screen (with a city token description – a helpful reminder on the inside of the screen) and guards have their own sheet, so the players won’t have to check the rulebook every time they forget what are the basic rules for the guards. Last but not least, there are three more tokens that make the life easier: 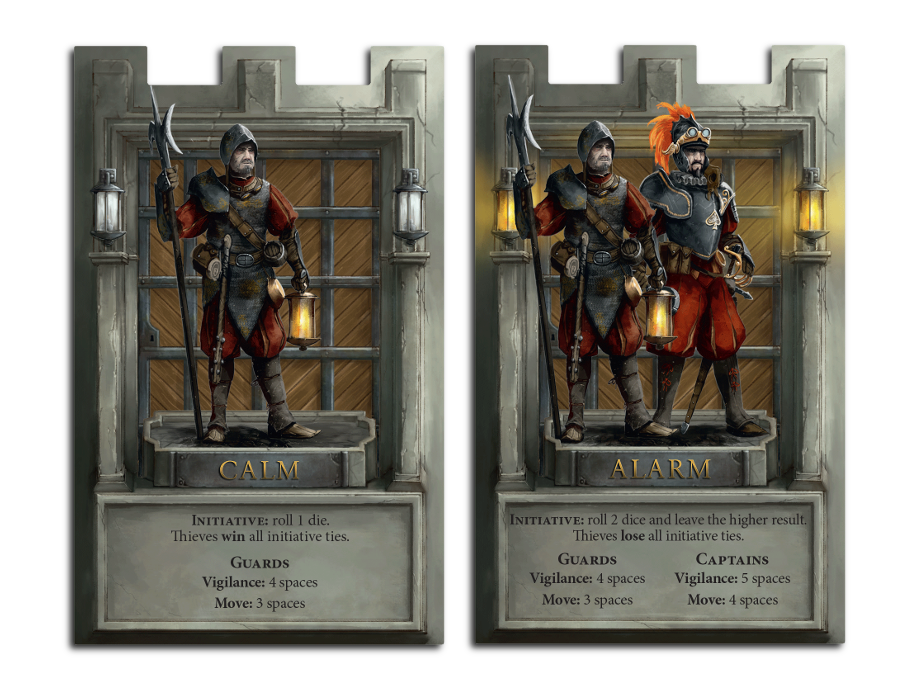 City Guard Sheet (Calm side and Alarm side)

The full rulebook for Age of Thieves is now online! You can download it at BGG – take a look and tell us what you think. In this official thread you can post your opinions and ideas – we are excited to know what you think!

Thank you for Spiel'16!
Quickly! After him! - Guards and Dungeons in ...
Age of Thieves - Game Overview