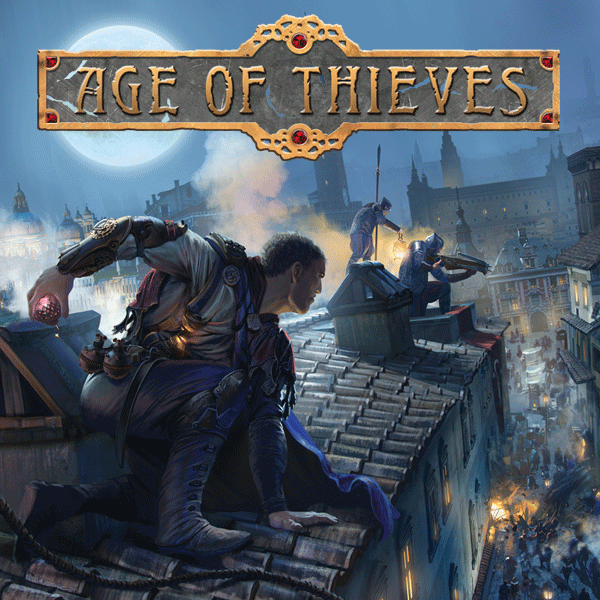 Age of Thieves is a fantasy board game of strategy and adventure set in Hadria, a port metropolis located on the northern fringes of the mighty Empire. Each player becomes a master thief about to commit the most daring burglary of his career. During the game players may use unique abilities of their thieves as well as various action cards, which represent maneuvers, alchemical potions or complicated devices inspired by visionary ideas of Renaissance inventors. The players choose cards to play and then use available Action Points (AP) to plan the order of their activities.

The thief who will manage to escape through one of four city gates taking with him the Emperors’ Jewel or other valuable loot worth the most Victory Points (VP) will be the winner of the game. Anyone who will stay inside Hadria after the event deck is depleted will be caught and mercilessly thrown inside the city dungeon, their names erased from the annals of the omnipotent Guild.

Before the game players should prepare the board. They place city tokens, figures of guards and jewels on indicated spaces of the city map. The city tokens are placed face-down and they represent short encounters or adventures that the thieves must face during their nocturnal travels through the alleys of Hadria – anything from an unexpected patrol of guards to a drunken merchant, whose pouch full of gold may quickly change its owner.

After setting up the board, each player chooses (randomly or not) one thief to impersonate. Each thief is a unique character with a passive ability described on his or her thief sheet and with a special action card representing a given thief’s area of expertise. Once the thieves are chosen, each player takes 2 basic action cards that are always available and enable him to move around the board or draw new action cards as well as 2 general action cards that give him a range of various possibilities – from bribing a guard to sending a clockwork owl on a scouting mission. Finally, each player takes 10 markers of Action Points (AP), his thief’s unique figure and a screen, behind which he will be planning his activities. Now players are ready to start the game!

Event cards control the flow and the length of the game. Each turn players draw and reveal 1 event card from the top of the event deck – the calm deck or the alarm deck depending on the stage of the game. Event cards change the conditions of the game and introduce new, temporary rules. The first player reads the revealed event card aloud, introduces its effect and then rolls a die to determine the initiative of the city guards – how quickly they will react and how capable they will be in spoiling the thieves’ schemes. Once the initiative is rolled, each player draws 1 action card. 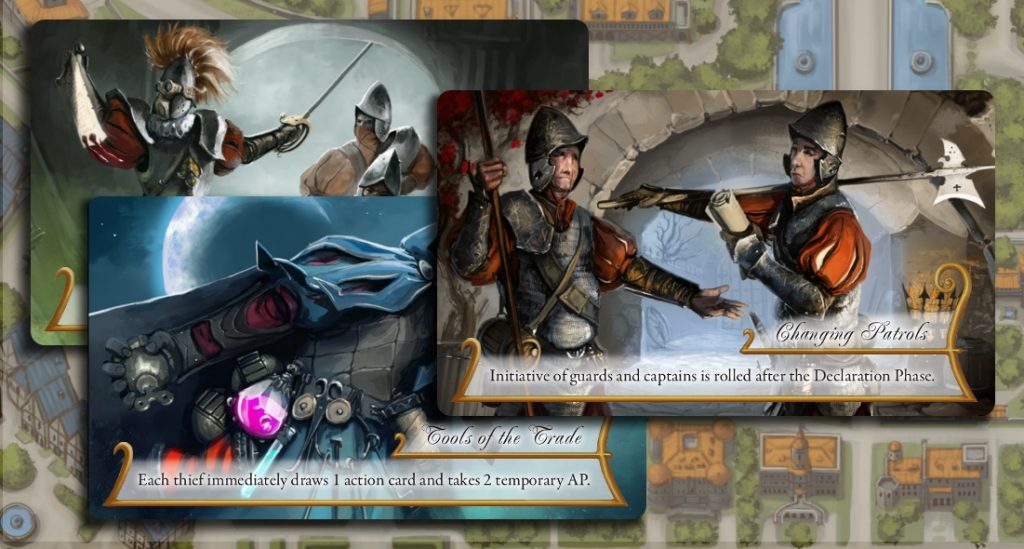 The Declaration Phase and the Resolution Phase are the most important steps of each turn. In the Declaration Phase the players simultaneously and secretly plan their actions for the current turn. Each player declares his action cards i.e. he places behind his screen any number of face-down action cards from his hand and then places on the top a number of his available AP. The number of AP placed on a given action card determines how quickly this card will be resolved – and whether the player will do it before or after the city guards activate. In other words, the more AP you place on your action card, the sooner you may use its effects. 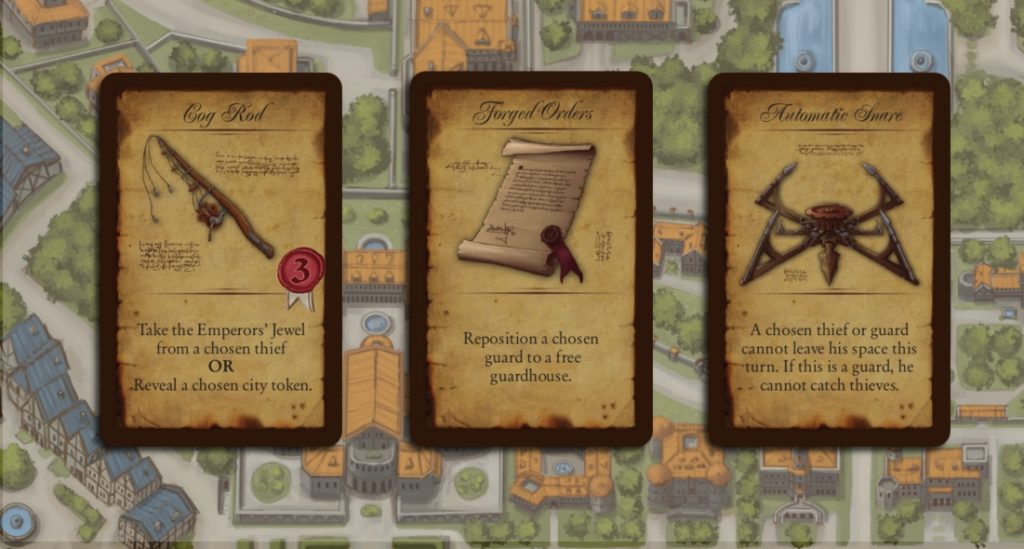 After the players and the city guards resolve their actions, the game proceeds to the Clean-up Phase, during which the players prepare for the next turn: all declared action cards are discarded, various temporary markers, such as fire or smoke, are removed from the board, the first thief marker is passed to the left and the players gather their AP markers to reuse them in the next turn.

The ultimate goal of each thief is the Emperors’ Jewel hidden inside the palace in the center of the board. Any thief who manages to steal it and carry it away from Hadria (thus escaping from the board) immediately wins. However, it is not the only way to win. When the Emperors’ Jewel is stolen, the alarm is raised in the city – the players have only 5 turns to wrest the jewel from their rival’s hands and leave Hadria. If, at the end of the fifth turn, the Emperors’ Jewel is still on the board, but some thieves have managed to escape, the winner is the player who has gained the most VP for the stolen riches.

If you liked this short overview, why don’t you pay us a visit at Age of Thieves BGG page? Join the forum, leave a comment or subscribe for all the latest news!